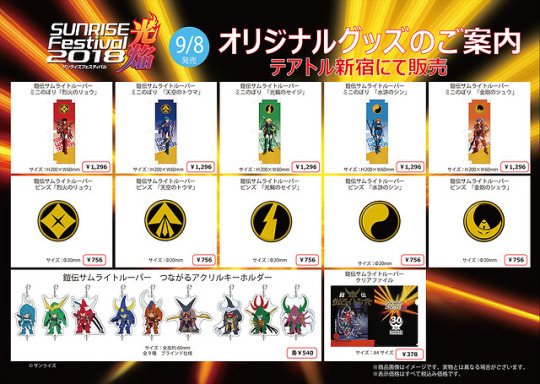 Part 2 of this year’s Sunrise Festival has officially begun, which includes screenings of select episodes of Yoroiden Samurai Troopers and the release of new, limited merchandise on September 8th, 2018, in an event called “Midnight Party”, a reference to a song the whole cast sang on one of their cds!

The goodies shown here appear to be flags for each of the troopers (google translate says they’re “climbs”?), pins of each insignia, key-chains, and an A4 clear file.

According to the blue bird, (in a tweet I can no longer find) there’s a limit on how many of each item a single person may buy. Fingers crossed that it’s not true!

I want all the chibi Mashou keychains. ?