And lastly, a fan was able to get all 3 special mystery pins from the Gachapon. Here are the designs:

Do you want the exhibit-only goods, but don’t want to buy a plane ticket to Japan? One of our fellow fans has suggested this site as an option: https://otsukai.manga.tokyo/

Disclaimer: I have never used that site or its services and am not affiliated with them in any way. Apparently you’ll need a paypal account to pay. (If you want the rascal-trooper cross-over goods, they have completely sold out at this time. The Gallery is hoping to get a new shipment soon!)

Announced yesterday for sale at the Nakano Broadway Gallery Exhibit:

From the top: Sweaters in two colors, a new tote, and a pouch (this was previewed earlier; not sure why it’s on this announcement too). From the bottom: a hoodie (or Zip Parka as translated by Google) and a jacket (or Coach Jacket). Sales begin exclusively at Nakano Broadway, from October 10th until the 30th!

On October 10th, at 10:00AM Japan Time, the 30th Anniversary Gallery Exhibit at Nakano Broadway opened to the public! Many fans rushed to the store to get their hands on the limited goods, and while they were at it, they shared their pictures!

Some items from the Sunrise Festival are being sold during the exhibit!

All the different buttons, 30 designs shown, while 3 are a mystery!

Artwork and screencaps on display. souce

The Rascal-Trooper keychains sold out less than four hours after opening!

These banners are apparently ~70″ tall!

Since the exhibit runs until October 30th, hopefully the Rascal-Trooper goods will be restocked to satisfy the demand. Many thanks to the fans in Japan for sharing their photos! I hope there’ll be pics more soon!

Maaaan. I wish I could get my hands on some of these

The following images are of the acrylic figures!

More merchandise apparently for the October 10th exhibition, including what looks like a backdrop that people can pose in front of.

We’ve got a new update from Animate, the store that will be hosting the Yoroiden Samurai Troopers-themed pop-up shops! Check out the preview pics of the 30th anniversary products:

And just for fun, here’s a promo image of all 5 troopers looking very kawaii!

And a hard-cover card case with prints:

And possibly a cellphone/wallet case, pins (including the Masho!), and something else Seiji’s pumpkin soup:

Hopefully we’ll get a better (cough-any-cough) photo of the Mashou buttons/pins. I’m kind of amused the one we see the most of in these photos is Rajura, the illusionist. You can see a bit of Anubisu’s hair peek out on one photo, he’s under Seiji. I also can’t help but wonder if they included Kayura or not.

I guess this means the Doku armor symbol is officially supposed to face left. I’ve seen it face both left and right in other YST merchandise.

Man I wish I could get my hands on this Mashou merch. (Drools.) 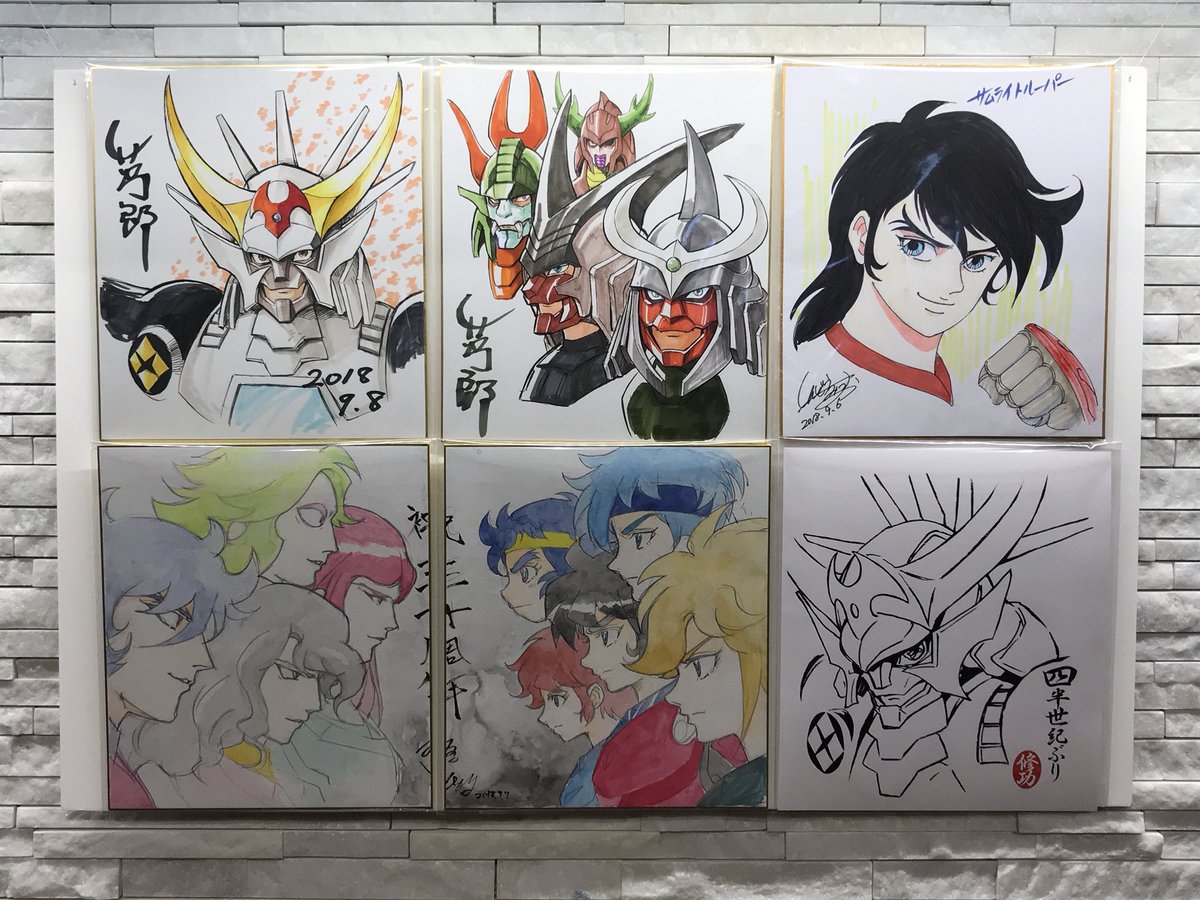 It looks like this is some artwork that was done and displayed at one of the pop-up shops for the 30th anniversary.